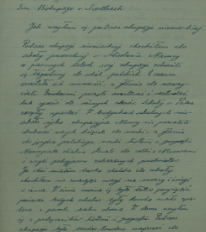 All documents from the archives of the Hoover Institution, based in the USA – the digital copies of which have been transferred in favor of the Institute by the National Digital Archives pursuant to an agreement concluded by and between the National Digital Archives, the Central Archive of Modern Records, the Hoover Institution, and the Witold Pilecki Institute of Solidarity and Valor – are made publicly available in accordance with the provisions of the Act of 14 July 1983 on National Archival Resources and Archives.

All materials from the archives of the Committee for the Commemoration of Poles who Saved Jews – the digital copies of which have been obtained by the Witold Pilecki Institute of Solidarity and Valor pursuant to an agreement concluded by and between the Committee and the Institute – are made publicly available in accordance with the provisions of the Act of 14 July 1983 on National Archival Resources and Archives.

On the basis of the agreement between the Katyn Museum – branch of the Polish Army Museum and the The Witold Pilecki Institute of Solidarity and Valor, the Institute has acquired digital copies of the materials from the collection of the Museum, which are made available in accordance with the Act of 14 July 1983 on the National Archival Resources and Archives.

Compositions written by Polish children on the subject of the Second World War from the collections of the Archives of Modern Records, the State Archives in Kielce, and the State Archives in Radom are made available by the Witold Pilecki Institute of Solidarity and Valor in accordance with the Act of 14 July 1983 on the National Archival Resources and Archives.

The “Chronicles of Terror” testimony database provides access to the Second World War accounts of Polish citizens, who suffered immense hardship at the hands of the German and Soviet totalitarian regimes. The repository features, among others, depositions given by witnesses to crimes committed by Nazi Germany during the occupation of Poland in the years 1939–1945. These accounts were held by the Main Commission for the Investigation of German Crimes in Poland and its legal successors. We also publish the testimonies of Poles who left the Soviet Union together with General Anders’ Army. These were collected from 1943 on by the Documentation Office of the Polish Army in the East. The depositions concerning Poles who helped Jews during the occupation were collected from 1999 on by the Committee for the Commemoration of Poles who Saved Jews.

Accounts concerning the victims of the Katyn Massacre were collected by the historian Jędrzej Tucholski. At the end of the 1980s, he carried out a nation-wide campaign to gather information about the victims of the Soviet crime, by means of the “Zorza” Catholic Family Weekly.

Children’s compositions about their wartime experiences were created in response to a competition organized in 1946 with the approval of the Ministry of Education. The competition was held in primary schools under the supervision of regional education authorities and school inspectorates. The essays were then deposited in the Archives of Modern Records and other state archives in Poland.

The accounts record the harrowing experiences of Polish citizens – victims of the terror of two totalitarian regimes. Many contain graphic details, and therefore should be accessed by minors only under adult supervision.

Documents available in the repository should be interpreted using the methods and tools of historical research. The contents of the depositions were affected by the circumstances in which they were made, as well as by the differing intentions of interviewers and interviewees. Sometimes, human memory proved fallible, while not all proceedings in which witnesses were heard ended in convictions.

We welcome all comments and remarks regarding the material published in our testimony database. It is of the utmost importance for us to obtain detailed information about witnesses and the people and events mentioned in these testimonies, for only in this way will it be possible for us to ensure their accurate, factual description. All remarks should be sent to the following address: